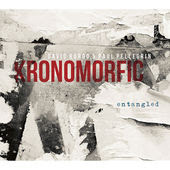 Kronomorfic is an ambitious undertaking for octet and four guest performers engaging in polymetric time. It is headed by tenor-sopranist David Borgo and drummer Paul Pellegrin, who share the compositional duties. Entangled (OA2 22112) is the recording at hand. It is carefully wrought and well-thought out compositionally, with room for solo time, often enough in a through-composed, multi-metered context. The effect ultimately is avant and free sounding, though the ensemble often enough works to realize explicitly directed results.

In addition to Borgo and Pellegrin, the ensemble consists of Ben Schachter on tenor for all but one work, plus John Fumo on trumpet and flugelhorn, Anthony Smith on mallets, Peter Sprague on nylon-stringed acoustic guitar, Paul Garrison on electric guitar and effects, Andy Zacharias on contrabass, and the four guests: Michael Dressen on trombone, Emily Hay on flute, Brad Dutz on vibes and marimba, and Mark Dresser on contrabass.

There are times when the cycling of motives sounds vaguely Braxtonian, or even a bit related to Tim Berne in his latest Snakeoil phase, but otherwise this is intricate, original avant jazz that thrives on complex forms of swinging polymetric composed freedom.

I've been appreciating what David Borgo has been coming up with for a long time. He is a West Coaster who innovates and creates excellent music without a good deal of fanfare but never flags in so doing. Paul Pellegrin is a simpatico force in this new music. Together they have created something very worthwhile, with the help of an exceptional group of musical compadres who realize the music with feeling and solo well when called upon in keeping with the special modern style of the music.

In short Entangled is in every way a winner. Kronomorfic is the perfect vehicle for the Borgo-Pellegrin approach. I hope they can keep together for many live appearances and further recordings in the years to come!