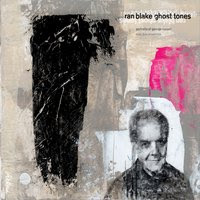 The album up for discussion today has a kind of inevitability to it, not in any predictable, formulaic way, but because of closeness and complimentary affinity. Pianist-composer-conceptualist Ran Blake was long a big fan of the music of George Russell in the early days and later of course was for many years his colleague on the faculty of the New England Conservatory. Musically both went about creating new music-jazz nexuses, each in their own way, that heightened their individual brilliances while putting them both in the principal innovative stream of artists from the '50s onwards.

That Ran Blake should devote an album to "Portraits of George Russell," with the principal title being "Ghost Tones" (a-side 0001), has a rightness to it that the extraordinary contents very much confirm.

This is a part of Ran Blake's 80th-birthday celebration, and rightfully so. He has been an institution over the years. His stature as an important innovator continues to grow. And on this disk he shows us his evolved brilliance of interpretation in relation to the compositions of George Russell and the standards George rearranged so strikingly. There are also some Blake originals and it all adds up to an exceptional outing.

Ran is at the forefront throughout on piano and electric piano with some striking solo reworkings of classics like "Stratusphunk" (which Ran first recorded in 1966 on the seminal ESP solo disk). But there is a new version of "Ezz-Thetic," too, that has a striking immediacy to it.

The album is conceived of as a sort of musical biography of Russell. With or without that context, though, we get some remarkable music. There are duets and larger ensemble re-creations, like the main theme from "Living Time," all essential listening and much more than a simple "greatest hits" redone. It has the stamp of Ran Blake the re-creator and creator, the supreme interpreter and the innovative, acute melodic-harmonic force. His player teammates on the album are former Russell and NEC students and they fit in perfectly with voicings and/or solo work that maintain the high standards of the outing throughout.

It all shines very brightly. A perfect tribute that reforges Russell's critical legacy anew, celebrates his music and in so doing shows us the acute brilliance of Ran Blake in his 80th year.

A fabulous disk! Do not miss this one.