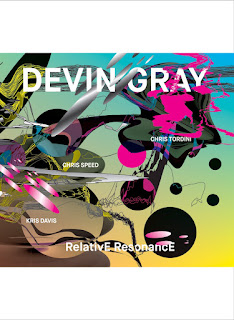 Drummer-composer Devin Gray has assembled a crack unit of some of New York's finest improvising artists and turned them loose on his compositions in the new CD RelativE ResonancE (Skirl).

Eight numbers make the most of linear and rhythmic complexities, showing compositional girth and improvisational breadth. Devin's intricate and substantially original drumming forms the backbone for the ensemble work. The prowess of Chris Speed, tenor sax and clarinet, Kris Davis, piano, and Chris Tordini, bass, maximizes the potential of the difficult composed parts while opening the music up to the freely improvised lines and textures that set each apart as special players.

The title comes out of a quote from Tony Williams, on how he sought to ensure that the turning of both top and bottom heads of each drum were simpatico so that "relative resonance" prevailed. Devin takes this in a wider sense, by trying to achieve the same sort of sonic presentness with the full quartet. And they succeed. They are definitely mutually attuned.

There are some very intricate through-composed pieces where each player is called upon to play virtuoso parts that juxtapose with and against each other to give out with that sort of resonance Devin lives within. There are a few more blowing-oriented vehicles interspersed throughout the program to contrast. It works!

Devin is an artist with a vision. All that becomes clear as you listen to the album. He is something else, defining what a drummer-composer-leader can be today. The choice of musical partners seems pretty near ideal in making his vision "sound." They have played together for five years and the recording shows the sort of rapport and closeness that can come out of long-term musical interaction.

This is avant jazz of the highest sort. You need to hear it.