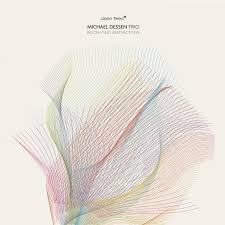 In the aftermath of the passing of the master of new jazz, Ornette Coleman, we experience an example of the pianoless avant jazz ensemble, something in many ways Ornette institutionalized, though Rollins and Mulligen prefigured.

It's a matter of trombone, acoustic bass and drums today, in the example of the Michael Dessen Trio and their album Resonating Abstractions (Clean Feed 291). Michael prevails on the trombone and electronics, Christopher Tordini plays an out-front acoustic bass, and Dan Weiss gives us some very inventive drums.

It is a seven-part suite composed by Michael especially for this trio. There are intricate composed figurations that act as guideposts throughout, and serve as springboards for free improvisations of an advanced kind. Dessen's electronics seem generally to be activated by his trombone playing and in a very real sense give us a second set of timbral colors from the front line.

So Dessen comes forward in three important ways and sets the definition for what happens on the suite via compositions, trombone prowess and electronic manipulations. Tordini and Weiss have a huge impact on the outcome, though, with what they do inside and outside the compositional structures. The end result is very contemporary avant trio work that includes new music abstract elements along with "post-jazz" improvisational brilliance.

It's one of those recordings where one finds more and more to appreciate as one listens repeatedly. The trombone work is examplary, the trio as a whole fully integrated and advanced, the bass and drumming in the front ranks of innovation and the compositional structures definitive.

It all works very well as a total aesthetic statement. Michael Dessen takes us to a very good place. Highly recommended.

Posted by Grego Applegate Edwards at 5:29 AM