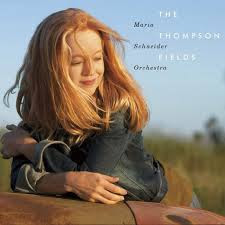 The big band music of Maria Schneider over the years has been original and particular. She follows her own muse. After eight years without a release she returns with her orchestra for a winning set of works on an album entitled The Thompson Fields (artistShare as0137).

It is an album with a rather unified feel to it, lyric, poetic and pastoral for the most part, rhapsodic and melodically alive. The group is a rather large one, 18 members plus additional percussion on one piece. I will list who solos on the album to keep it brief: Scott Robinson, alto clarinet and baritone sax, Marshall Gilkes, trombone, Greg Gisbert, fluegelhorn, Donny McCaslin, tenor sax, Frank Kimbrough, piano, Lage Lund, guitar, Rich Perry, tenor sax, Steve Wilson, alto sax and Gary Versace on accordion. Each gives us soloing that extends the mood of the music at hand while also showing their artistry.

What's satisfying about this set is the unified mood, nature-oriented, expressive, melodically eloquent, well-integrated....It shows us a Maria Schneider at peace with the natural world, using her gifts to create a tapestry of well-orchestrated big band music. But don't expect from this a new age limpidity. This is must of lyric heights but it has thrust and power too. And so we get a big-band jazz of a special sort. In some ways it has a familial relation to the impressionism of Gil Evans at his best, with a rejoinder that this is all Maria Schneider. She occupies her very own branch of a lyrical tree. We can admire the music on its own and appreciate it for its singularity. I am doing just that.

There is a great deal of music on the album, and all of it seems to piece together to give us a very vivid picture of Ms. Schneider today. Beautiful.