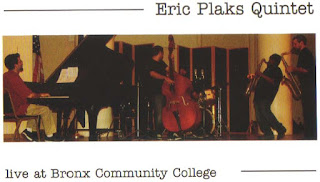 The inside-to-out inclusiveness of pianist Eric Plaks is showcased on the recently released 2009 date with his quintet, Live at Bronx Community College (CIMPoL). It continues on where his studio date (Cadence Jazz) leaves off (see the May 1, 2015 posting for a review of that). The Plaks compositions are set up by a version of "Naima" and one original by tenor saxist Don Chapman, "Elvin Out."

Chapman and Alan Davis form a two-tenor frontline, Leco Reis and Jon Panikkar are the rhythm team on bass and drums, respectively, and then of course Plaks centers things on the piano.

The tenor players take on pre-outside styles as well as the free avant realms. They excel at the latter. Plaks once again shows his piano versatility and remains a soloists of great interest who can channel Cecil but then give out with convincing synthesizing of earlier styles in very much his own way. He is an artist very much worth hearing.

And the compositions stand out too as worthy of our attention.

The live ambiance of the concert gives us an edgy spontaneity that helps push forward the in-the-moment expressivity--which of course is what an in-person jazz presentation does so well if things are right. That's much the case here, surely.

It's a very good listen and another feather in Eric Plaks' cap.