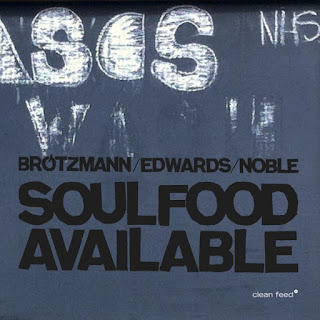 The question to me is not whether you should have avant reedist Peter Brotzmann's music in your collection. If you embrace avant "free" jazz, you no doubt should. The question then is how many. For the completest who already has 50 or so, there is no issue since you want it all. For those with only a few, selection becomes important. The second release of the Peter Brotzmann trio of Peter on tenor, alto, b-flat clarinet and taragoto, John Edwards on double bass, and Steve Noble on drums has been out for a little while: that is, Soul Food Available (Clean Feed 316). It was recorded live at the Ljubljana Jazz Festival in 2013.

If you don't know, Peter Brotzmann burst on the scene in Europe in the late sixties as someone who had listened to and internalized the torrents of tenor sounds that Albert Ayler made so originally and vibrantly in his lifetime. Brotzmann created an equally torrential expression that related to Ayler but branched off into his own realm.

He has been at it ever since, an indefatigable expressionist who can be relied upon to produce energy music of a high level in ever-varying playing contexts.

For the Ljubljana set he brings in a trio where he is often very out front. Edwards and Noble provide the sympathetic, energized openness that is much needed to motivate Brotzmann to speak torrents. They both have the torque and imagination to bring the free moments to vibrant life.

Brotzmann responds with fanfarish high scaling, of course especially on the tenor but also in a varied way on alto, clarinet and taragoto.

It is an excellent full-length example of the raucous yet considered sound of Brotzmann in full bloom in this, his later period. So if you don't have any or much of him in a small group setting later on, this one fills that gap very well. It is excitingly uncompromising total freedom. And it blazes through the heavens like, I suppose, a meteor.

So this would be a good addition to your avant collection if you don't have enough of him as he plays today. If you don't know him at all, this isn't a bad place to start. If it does not offer huge surprises, it captures Peter in fine form with an excellent trio. Enough said.