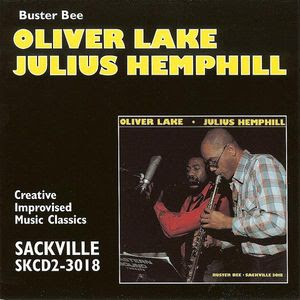 Oliver Lake and Julius Hemphill, with Hamiet Bluiett and David Murray, founded the monumentally landmark World Saxophone Quartet in 1977. They came up with compositions that brought the music forward with a combination of pre-arranged structures and brilliant improvisational interactions. Early that following year, in 1978, Lake and Hemphill went into the studio in Toronto to record a series of duets that gave us a more pared-down, intimate view of their music, just the two of them on various saxophones, improvising around some of their choice compositions.

The result was the album Buster Bee (Sackville 3018), which has been available in CD format for some time now but still speaks readily and strongly to us in the present.

They both were in peak form, doing as founding members of the St. Louis collective BAG what the important Chicago artists in the AACM were also doing: creating a new series of chamber and larger group musics that showed music lovers an ambitious, non-commercial striving after an avant jazz serious about advancing and extending forms and freedoms into a truly classic Afro-American art form. It of course was much about what jazz had forged previously at its best but now with both collectives a very conscious effort was being made to achieve self-determination and accelerate the creation of improvised music as first and foremost an art, rather than an entertainment per se.

Buster Bee was one of many small chamber efforts being recorded in those days, but along with a handful of sterling examples by Mitchell, Braxton, Lacy and a few others it was especially successful.

The success comes out of the close-knit sympathy of both players towards one another and their collaborative musical vision. Soul and structure, testifying and scaling high walls of sophisticated musical forms come through fully on these six composition-improvisations.

A relaxed, intense yet open two-way dialog is what this album puts forward so imaginatively and consistently. Both come through as master improvisers who can craft compositional foundations that encourage both artists to create significant musical statements in real-time.

All of it speaks to us as freshly now as it did then. If we mourn the untimely loss of Hemphill on hearing this, we also rejoice that Lake is still with us, sounding great.

This is the real deal. A classic from an era that sometimes gets insufficient credit for the high-art innovations it spawned, for changing the focus in the music and opening us all up to the very many possibilities the improvisatory arts have to offer us. Yeah, so listen to this a few times and you will feel very good, I think.