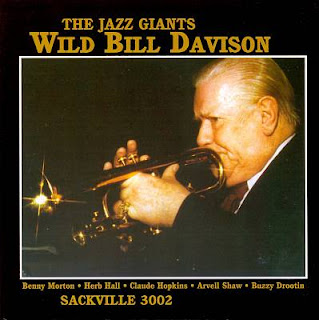 I first came under the exuberant spell of the cornet of Wild Bill Davison when I happened on an Eddie Condon Columbia LP during my youth. It was one of the best, I later found, of Eddie's albums in the '50s. That tremendous rip and high swinging acrobatics of Davison got my attention right away, and I've been a fan ever since.

It so happened that Wild Bill and some traditional jazz all-stars who dubbed themselves The Jazz Giants had a gig up in Toronto in 1968. The music sounded so good that a recording seemed a great idea. And so it was arranged that they get into a local studio and set down for posterity what they were up to. The result was the first album on the newly forged Sackville label. It is in reissue with extra cuts (Sackville 3002) and now very available as distributed by Delmark.

Claude Hopkins was on piano and responsible for the musical direction of the unit. In addition to Wild Bill and Claude there was an excellent gathering in Herb Hall on clarinet, Benny Morton on trombone, Arvell Shaw on bass and Buzzy Drootin on drums.

The repertoire was a straightforward selection of the sort of music they all had lived with for many years, "Struttin' with Some Barbecue," "Dardenella," "Black and Blue," "I Found A New Baby," etc.

Wild Bill is at his extroverted, ripping, ecstatic post-Armstrongian best. He blows his top. But everyone sounds just great. Hall, Morton, Hopkins and even Shaw have plenty of space to show their mastery and the Hopkins-Shaw-Drootin rhythm team concoct a mighty swing.

The album is a must for Wild Bill fans and highly recommended for its old-time infectiousness no matter whether you have dug deeply into the tradition or not. A joyful sound is made throughout.