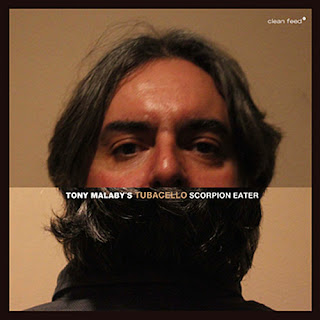 A little bit of back tracking today, with an album that has been available for a little while, but deserves discussion. The release in question is Scorpion Eater (Clean Feed 318) by Tony Malaby's TubaCello. As the group name suggests, this is a Tony Malaby led-group that features tuba, cello (and drums).

Tony of course holds forth as leader on tenor and soprano and is responsible for all the composition frameworks save one, which is a collective work. The album gives us good reasons why Tony is one of the top reedists on the avant jazz scene today. Joining him are Dan Peck on tuba, Christopher Hoffman on cello, and John Hollenbeck on drums, percussion and prepared piano.

The sax-tuba-cello-drums configuration gives us a special sonority that Tony utilizes well for the compositional ins-and-outs. And Dan and Christopher play important roles in the unfolding of the music. There is freedom, a special sort of group vibe, good interplay and spontaneous aural sculpting of a memorable sort.

Tony's well developed saxaphone sound and smart yet soulful note choice set the pace for the group and all three sidemen happily bring their sensitive and inventive selves into the picture for an all-encompassing result. The music pulses forward well thanks to Hollenbeck's motored excellence and the sort of contrapuntal interplay of tuba and cello against that, but there are also moments of chamber sound timelessness, depending on the particular segment of the composition within the total context.

It's not just a showcase for Tony's saxaphone style, though it is that at times. It is a total group effort that moves the music forward while not unmindful of the roots. Tyler's "Eastern Man Alone," Arthur Blythe's interactions with Abdul Wadud, River's Tuba Band with Joe Daley, things like this have some relation to the TubaCello band, but only in the foundational sense. The music sounds like itself here.

And what that is comes to you in very worthwhile ways. Scorpion Eater is one of Tony Malaby's best. The band gives you much to explore! Recommended for anyone keeping track of where things are going in the improv avant jazz realm.