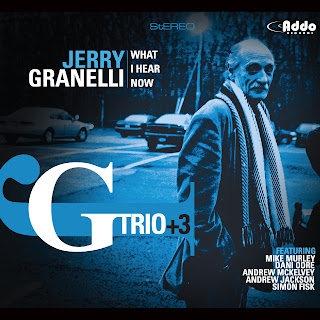 Drummer-composer Jerry Granelli has has made his mark on the music world for many years, as a member of Vince Guaraldi's most acclaimed band, as an in-demand session man, an educator, a force in jazz styles both mainstream and outside, as an artist with more than 20 albums as leader or soloist since the latter 1980s.

His latest provides an excellent balance between his drumming and his composing-conceptualization. What I Hear Now (Addo 030) is an evolution of his Gtrio with Simon Fisk on 3 string bassetto and Dani Oore on tenor and soprano, together for a number of years. Now it is a matter of the Gtrio +3, with the addition of Mike Murley on tenor, Andrew McKelvey on alto and Andrew Jackson on trombone.

There is a strong resonance of the four horns as a unit minus a chording instrument. It leaves bassist Fisk and drummer Granelli an aural space where they can articulate rhythm and counter melody freely and creatively. The four horns form contrasting blocks both in terms of collective and individual improvisations, and as a compositional choir that partakes of the looseness of collective freedom but structures it with excellent motives and harmonic movement.

There are moments now and then that remind me in the use of space of the later Paul Motian groups that had multi-tenors. Not that the music sounds like his so much as the entrances of the horns against the rhythm have a pronounced dynamic quality, and in their deft interweaving of the composed and the collectively improvised.

The four horn players are each significant to the total sound and what individual soloing that happens is very good. But it is a contrapuntal overlap of the four that stands out. Jerry Granelli has a strong sense of what he is after and gets a near-ideal balance between horn quartet and rhythm duo and the various, always interesting blends the band gets.

The compositions stand out as very original, the drumming as special and smartly free, the band as very cohesively together as an memorable musical entity.

What I Hear Now is neither entirely out, nor inside in any formulaic way. It is good jazz, original music, something you should by all means hear.