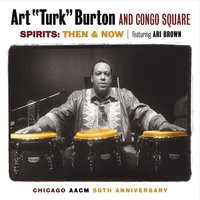 To celebrate the 50th anniversary of the founding of Chicago's famed AACM, formidable congolero and bandleader Art "Turk" Burton gives us two sessions featuring his Congo Square ensemble on the recent release Then and Now (TNT CD 101). The title is the right one given that we get a live session of the band in July 1983 and then a studio gathering from around a year ago, February 2015.

This is heavy-hitting, deep Afro-Cuban hard bop freedom, with two large ensembles having their way nicely with some jazz classics and Burton originals. This is the AACM in the swinging groove mode, with a wealth of seminal players known and less known, carrying forward the Afro-American roots and taking it always beyond.

The early set features Turk with the unsung Vincent Carter on soprano, who did not live long enough to make his name for us all, but sounds great here. Then there is Mwata Bowden on baritone and Douglass Ewart sitting in for the second number on alto along with legend Donald Rafael Garrett on bass. The rhythm team for this session is Theodis Rodgers Jr on piano, Harrison Bankhead on bass and Reggie Nicholson on drums. The band is grooved and loose.

The second gathering features a long and very Afro-Latin version of "Afro Blue" along with a further nod to Trane with "Moment's Notice" (with lyrics by vocalist Taalib-Din Ziyad) and "A Love Supreme." The session concludes with three engaging Burton originals. "Mojuba" has a burning percussion-drum thing that locks in and moves your feet like nothing else on the planet. Hot!!

In other words this second half of the album gives us a well-paced set that has plenty of room for Turk's congas along with "Cha Cha" Torres on bongos, Luis Rosario on timbales and percussion, Avreeayl Amen Ra on drums and Harrison Bankhead's bass firmly in the groove. Ari Brown sounds fabulous on tenor and soprano. Kirk Brown excels in an Afro-Tyner mode that kicks the band forward. And Taalib-Din Ziyad's vocals bring another nice dimension on his features. Check out his flute, too!

All in all with both groups the emphasis is on the earthy roots mode that of course has always been a key part of AACM tradition. It is a glorious hoot all the way with a rock solid groove that Turk spurs forward at all times, and some excellent soloing from the horns.

This one has it all there from start to finish. The Afro groove never sounded better and the free blowing atop puts it all into the modern zone as one always can depend on from AACM's bright lights. It's a great way to send the AACM off into another 50 years. Long may they flourish!