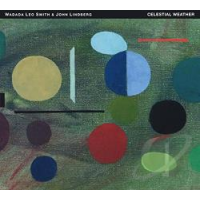 Wadada Leo Smith is one of those few artists whose every release these days should be heard. That list of artists for me is small but his music, his trumpet playing and composing show us a creator who keeps getting better, deeper, never flagging, ever.

So though I am late in posting on this, his album of duets with long-time bassist associate John Lindberg is another essential listen. The album is entitled Celestial Weather (TUM 046). I can't remember hearing John Lindberg doing something I did not like, either, for that matter, so not surprisingly this one makes me smile.

The Finnish label TUM does its usual exemplary job with the audio and physical packaging.

And so the music....It is an hour of excellent things to hear. There are three multi-part numbers involved. The first, by Wadada, pays tribute to the wonderful bassist and human being from the AACM and especially the Art Ensemble of Chicago. "Malachi Favors Maghostut - A Monarch of Creative Music" does the late master honor. John's bass playing seems suitably puckish here and Leo plays something that Malachi would no doubt have loved to be a part of. Both fill the air with some fine, outgoing extroversions worthy of the tribute.

Next follows the two-some's collective five-part "Celestial Weather Suite." It is open-freedom music, each part named after an unusual weather event, "Cyclone," "Hurricane," etc. They explore various creative possibilities, each interacting sensitively and soulfully to the other. There is agitation, there is relative calm, but there is never a loss as to what to play.

The final is the two-part Lindberg piece "Feathers and Earth." As with the others the compositional element is so integrated into the improvising that it is not all that easy to separate the two, but here there is a head melody/motif beginning the second segment. What matters is the totality and that there is no denying. It is essential.

In the end we get inspired trumpet and bass playing, a duet far beyond the expected status quo, whatever that might be, and into some SERIOUS (Sirius) stellar explorations that while spontaneous as a whole are the product of two lifetimes of committed musical direction.

So of course I can only recommend this to you. It is celestial in the best sense. And the listening is nothing but pleasure.

Posted by Grego Applegate Edwards at 6:31 AM