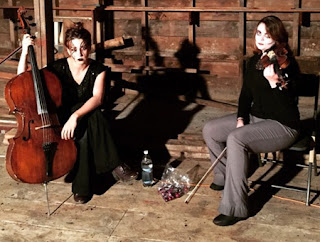 Some music defies categorization so thoroughly and effectively that it becomes its own category. I believe that is the case for the Naked Roots Conducive and their album Sacred521 (Limited edition self-released CD). It is the duet coupling of Valerie Kuehne on cello and Natalia Steinbach on violin, both on vocals. They come at us with some very interesting originals.

I have had the occasion to cover Valerie Kuehne's music, happily, as part of her Dream Zoo incarnation (see my Gapplegate Classical-Modern Review http://classicalmodernmusic.blogspot.com February 20, 2012 and March 15, 2013 postings).

At the time I felt her music was variously attached to categories of "classical, experimental, melodramatic popular song, avant cabaret" and Sacred 521 gives us a further evolution along those lines. With the combined strings of violin and cello, playing intricate and expressive written and improvised parts that integrate well with the song-oriented dual vocalizations we have something even more enticing. In other words Natalia Steinbach makes for a near perfect musical partner with Valerie Kuehne.

As they state in the album's liners, the music (and its dramatic lyrical content) "seeks to provide education and cultivate awareness concerning mental illness, addiction and trauma," ultimately "to help others recover and find a way of living that is rooted in hope and creativity." The music expresses the anguish of undergoing trauma in an everyday world that generally avoids connecting positively to ameliorate and cure those who are afflicted in such ways. Yet in the end there is positivity and hope.

The process of healing finds its concretization in the vividly expressive aestheticism of the music on Sacred 521. It is outlandishly over-the-top at times, but then there is always a very original combination of string-part interactions and vocal immediacy. The whole thing has a point, which helps to put it all in focus.

It may take some getting used to, and some may not find their way through that, but those that do will experience a one-of-a-kind music, beyond category, yes, but in that sense a self-contained world of expression all its own. Bravo!