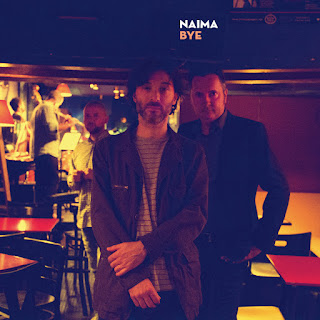 New music nearly always involves a jump into a stream of the unexpected, especially if you are not familiar with the artists-creators. That experience can be invigorating, if everything is right. I felt that special something on the first hearing of the Valencia, Spain-based electroacoustic piano trio Naima and their recent recording Bye (Cuneiform Rune 418).

It is a distinctive and distinguished threesome that combines the sophisticated harmonic-melodic impact of early Jarrett trios and perhaps even a touch of Evans trio interactivity with some of the arranged complexities of the Bad Plus--and the immediacy and electricity of jazz-rock. Naima is Enrique Ruiz on piano and synths, Luis Torregrosa on drums, and Rafael Ramos Sania on acoustic bass. This is their fourth album. It uses electric effects and synthesizer in conjunction with the acoustic instruments to break the music into multiple sound-color cells, which with the largely Ruiz-Torregrosa compositions and arrangements manages to carve out an original approach, all of which ends up sounding like none of their possible influences.

They avoid typical head-solos-head structures for more unexpected composed-improvised sequences. Some of it has a kind of minimalist-rock repetitive mesmerizing moment but integrated at all times into a harmonic-compositional vertical edge. And the music has a continual linear unfolding that keeps the ears very much on the alert.

There are a couple of Jaga Jazzist and Elliot Smith covers which sound fine but mostly it is a set of originals that expresses at times the loss of love ones, two in particular, that band members suffered through recently. Those feelings form part of the impetus behind the music heard here.

So there is at times a pointed expression of that loss, transformed artistically into trio music of impact and ultra-musicality.

Most unusual and original, this. If you want something that refuses to be pinned down yet is filled with musical abundance, this one is for you. Jump into the musical stream of Naima and find your way into their currents!