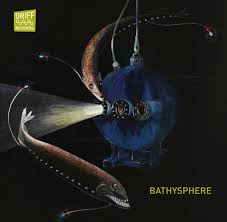 From the adventurist Driff label comes Bathysphere (Driff 1502) a rather exciting big band project from Jorrit Dijkstra and Pandelis Karayorgis. The 15-piece band features some of the best on the Boston scene, plus a few imported from elsewhere. The original charts are divided up between the two leaders, with four by Karayorgis and three by Dijkstra. They were written with the players in mind and so have a kind of organic resonance reinforced by the close relationship between the written and the improvised.

The band sports a full contingent of deep-noted players: Charlie Kohlhaus on baritone (and tenor), Jeb Bishop and Jeff Galindo on trombones, Josiah Reibstein on tuba, plus Nate McBride and Jef Charland on basses.

Tony Malaby and Seth Meicht join Kohlhase and Dijkstra in the reed section (and Dijkstra also plays some analog synth). Then there is Taylor Ho Bynum on cornet plus Forbes Graham and Daniel Rosenthal on trumpets, Luther Gray on drums, Andrew Neumann on analog electronics, plus of course Pandelis at the piano.

It is then a very potent group of players. The Bathysphere, that round iron diving rig that allows for very deep sea explorations, is an apt metaphor for the music, which has much depth, is exploratory and of course carries plenty of deep tone clout in its makeup.

The charts very happily prevail--covering a considerable stylistic distance from references to big band tradition and the bop and after giants to the outside contemporary avant realms. The piano of Pandelis, the alto of Jorrit and the solo power of other key players enrich the music considerably. Pandelis does some great work on piano especially. The compositional element is foundational, memorable and nicely alive.

This is primo avant big band music. Along with Michael Formanek's Ensemble Kolossus (covered yesterday) it is one of the most exciting large ensembles you can hear out there these days. The album is a showstopper for sure, so definitely give it your undivided attention. I hope the lineup can flourish and continue to evolve in the years to come despite the formidable economic obstacles such ensembles face today. For now, though, they come at you full-blaze! Do not miss this.