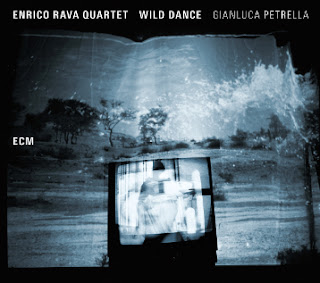 Ever since the 1967 release of Steve Lacy's The Forest and the Zoo many of us in the US have had the happy chance to follow trumpet master Enrico Rava's evolution and development. Some nearly 50 years later the music continues to flow. Recently we had the Enrico Rava Quartet plus trombonist Gianluca Petrella in a new album, Wild Dance (ECM B0023623-02).

It is a fine gathering of 13 original Rava numbers and one collective improvisation, played by Rava, Petrella, and quartet members Francesco Diodati on electric guitar, Gabriele Evangelista on double bass and Enrico Morello on drums.

The collective sonance is special, Petrella and Rava forming a spectrally unified yet two-in-one individual front line, guitarist Diodati comping sparely and soloing carefully and creatively when called upon, and the rhythm team of Evangelista and Morello giving us an open, pulsating looseness that moves the band forward in a swingingly laid-back fashion. But it's not all meditative. Listen to the afterbop motion of "Infant" or "F Express," for example, and you will get another dimension.

Rava sounds as sprightly as ever, but more and more concentrated in his solo work and the dual trumpet-bone double improvs. His tone is ever-ravishing. He has perhaps turned more to the spaciousness of a modern ECM sound than what he was doing 50 years ago, but one should expect development in a great artist and we certainly get that with Enrico.

Evangelista has some of the rootsiness of Roswell Rudd, with whom Enrico did some stellar work. He sounds perfect here. Diodati's guitar has a little of the Abercrombie space lining, but adopted and furthered in original terms. Hear also Envangelista in a solo framework and you get another dimension of the artistry there.

The album is going to appeal to Rava fans, for sure. It gives us new and excellent examples of his special ways, furthered to move on to the present-day. Anyone who appreciates a painstakingly sculpted modern/postmodern jazz sound that has adventure and lyricism built squarely into the presentation will love this one.