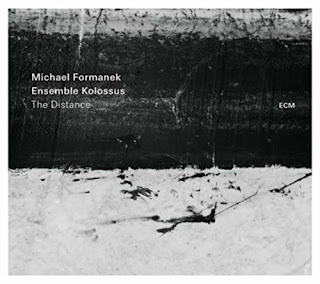 If you are like me and have been following composer-bassist-bandleader Michael Formanek and his music with interest but not as closely as perhaps one should, you are in for a rather shocking surprise. His debut recording of the 18-piece big band Ensemble Kolossus, The Distance (ECM 2484) is a milestone in contemporary modern jazz composition. Mark Helias conducts the ensemble in a program of beautifully advanced music. Formanek cites a wide array of creators that have influenced the ultimate sound of the unit, from Messiaen's organ music to the large ensemble sounds of Mingus, Sun Ra, Threadgill and Braxton.

Along with Formanek is an unusually full rhythm section of piano, bass, marimba, guitar and drums, all of which get put to important usage throughout.

Chris Speed on sax and Ben Gerstein on trombone have stellar solo roles, but then Formanek and others do as well. The massive full-blown sound of the ensemble cannot be denied. It is powerhouse music.

The ultimate effect is impressive. There is great compositional detail in the arrangements and the outcome has originality and great expressive thrust. It is quite simply a tour de force of ultra-modern jazz big band music, one of the seminal jazz composition triumphs of the present. It is both a summation and a cogent furthering of where we have been going in serious jazz composition in the past decades. Get it without fail!