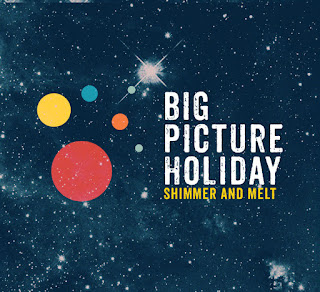 Big Picture Holiday and their album Shimmer and Melt (ropeadope 284) provides a contemporary kind of jazz-rock-funk music that sneaks up on you with successive listens. The first listen allows you to establish its affinity with what has come before, but then as you listen several more times there is something uniquely memorable that hits you.

The band is made up of Avram Fefer on saxes, bass clarinet and alto flute (and regular readers of this column may recall previous releases of his. Type his name in the search box for a few of those.) Then there is Kenny Wessel and David Phelps on electric guitars, Alexis Marcelo on electric pianos, Jason DiMatteo on electric bass, Chris Eddleton on drums and Todd Isler on percussion--the latter for three of the eight numbers.

The compositions-arrangements are more than mere platforms for the solo work of Avram, the guitarists and Alexis on keys, though they most certainly set the scene for some very nice improvisations, especially from Avram. The written parts are in the progressive rock-jazz mode, perhaps reminding a little of later Soft Machine and the later Soft offshoot outfits. There are nicely pronounced interlocking parts that give an edge and substance to things, sometimes even incorporating at times minimalist roots that provide another dimension to the grooves.

And it is the superior arrangements-compositions that, as you listen a few times, bring the music into the memorable territory. And the solo work reinforces that even further.

In the end this is an album that grabs onto you and leaves an excellent impression. If you want music that grooves yet gives you something sophisticated and advanced, this one is a definite for you!

Posted by Grego Applegate Edwards at 5:30 AM