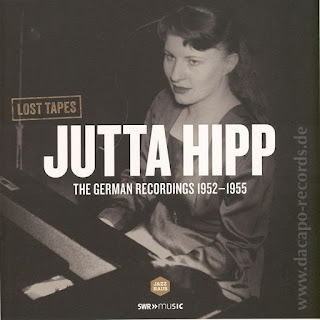 Pianist Jutta Hipp embodies one of those tragic tales of lost opportunity. She began her career in her native Germany, made some strides in recognition, got the attention and approval of Leonard Feather, who recorded her and sponsored her migration to the United States in the mid-'50s. There she recorded several albums for Blue Note, became enamored with the hard bop pianistic style, had a brief club presence and rather abruptly faded into the woodwork in the States, though she remained here until her death in 2003.

My adventurous record collecting days in early adulthood found me tracking down a couple of her Blue Note sides and later another of her with Zoot Sims that was reissued on CD. I had heard that her original work in Germany put her loosely in a Lennie Tristano mode, but it is not until now that I have been able to hear it. Lost Tapes: The German Recordings 1952-1955 (SWR Music 423) unearths a CD's worth of live recordings made under the auspices of SWR radio.

It is, to me, a revelation. Much as I do appreciate her Blue Note recordings, it is in this earlier period that she sounds especially interesting to me. The recordings find her in a trio setting and then with the additions of the tenor of Hans Koller, who has a Konitz/Marsh sound, understandably, Atilla Zoller on guitar and a very young Albert Mangelsdorff, who at that point was a budding bopper trombonist who had already gained facility and prowess.

I find this album interesting and worthwhile for what Jutta brings to the sound. She is at times quite adventuresome in her note choices and the occasional complexities of her harmonic comping style.

If you listen closely and sympathetically you hear a pianist coming into her own, playing in a style that seemed to suit her talents much better than the hard bop she later favored. Those who do not dig Tristano and his school can perhaps leave this one alone. But if you are like me and thrive on Lennie's innovations and those that followed in his pathways, you will doubtless hear in these recordings an interesting and talented acolyte who may have gone much further and thrived had she stayed on this route.

Fascinating music from a pianist whose migration to the US ultimately was her undoing. Hear this one if you want to know why she attracted all the attention in those first years.
Posted by Grego Applegate Edwards at 6:37 AM