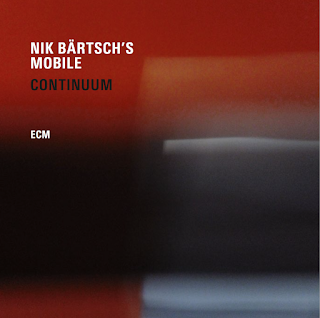 Nik Bartsch is undoubtedly one of the best of the later-day minimalists. He combines well-conceived, ever-evolving contrapuntal interlocking lines that bring ostinato patterns in and out of the musical carpet and devises ingenious variational voices that enter and themselves become ostinatos. There is a logical and rhythmically lively unfolding of ensemble sections, spurred on much of the time with interlocking drum patterns that put the music into jazz-rock-funk territory without losing the mesmeric qualities of the music. And he is consistently inventive, never banal.

His latest, Nik Bartsch's Mobile Continuum (ECM 2464), out on April 22 of this month, brings us a series of eight engaging works. Mobile is the all-acoustic version of his ensemble (Ronin is the somewhat electrified version) and the first on ECM to feature the ensemble. The group consists of Bartsch on piano, Sha on bass clarinet and contrabass clarinet, Kaspar Rast on drums and percussion, and Nicolas Stocker on drums and tuned percussion. They are joined by a string quintet for three of the pieces.

Bartsch's vision of the Mobile ensemble from the beginning had a communal collective aim, as opposed to one where individual virtuosity is the main impetus. There is a fascination with Japanese ritual culture, which comes out in the way the music dwells in its space to my mind. Like a traditional Japanese house, space and its material embodiment/containment in physical marking work together as a single experience. Multiple continuities and ritual-sacral defining of the music's presence are all a part of the totality.

There is an unpredictable contemplative element at work in this latest music and it surfaces especially when the overt motor rhythmic rock-funk element is not prominent.

It is as a result an album that alternately reflects and moves rhythmically forward. It is as a result as often a chamber music as it is a music that embodies the dance of patterned sound. Those who expect more of the explicitly motored Ronin need to set aside those expectations and let the music open itself up.

Those who look to Nik for complex space-funk minimal blow-outs are better served perhaps with some of the Ronin sides (type "Bartsch" in the index-search box above for some of my reviews). If you cast those expectations aside, though, this gives you another side of Bartsch's music universe. More quietly, less propulsively mesmeric, it nevertheless gives us a good deal of excellent music to consider, to ruminate upon and with. And there are still a few nicely motored works here, so there is balance.