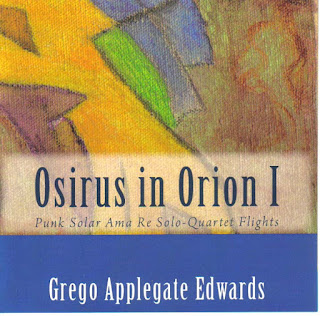 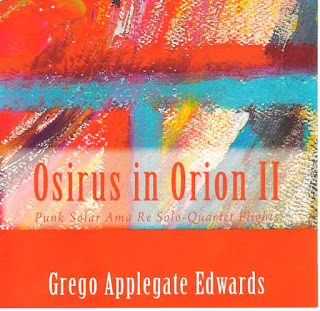 Grego here. My seventh and eighth albums, Osirus in Orion I & II (Ruby Flower), are now out and available on Amazon http://www.amazon.com/s/ref=nb_sb_noss_2?url=search-alias%3Daps&field-keywords=Grego+Applegate+Edwards As usual I occupy a little blog space to talk about them. A mock interview format seems like (as before) a way to break it up, so here goes.

Gapplegate: So what is going on with your new volumes Osirus in Orion I & II?

Grego: I wanted to gather together the more interesting of the off-the-cuff tracks I've captured while making some of the more dense and layered music that I've put out on my previous albums. The tracks have been culled from some of the first things I did in the current studio setting and then from various points later on. I had been working with the audience-free avant rock improv unit The Yodlers for more than a decade when 9-11 jarred my sensibilities and made me realize that there were other musical mountains I needed to climb, or at least try to start another climb or two. So I bought a bunch of new musical instruments (financed through a very modest inheritance), put together a recording studio bit by bit and started working on some ideas. The Yodlers operated on a principal of absolute freedom and spontaneity and that was cool. It involved a group dynamic that was often interesting but I was starting to think of different ways to get out to different places and I wanted to work on them a little. So I started with simple capabilities, two-track live and eventually four-track. I mostly just turned on the recorders at first and let something happen. Then eventually I got a much more sophisticated capability that let me compose and arrange for many instruments. But those first spontaneous moments had something too and I later returned to that from time to time to see what would come out. Osirus in Orion chooses some of the very first basement music and then from the later solo things that I thought had interest.

Gapplegate: So how does that work with the cosmos-themed titles?

Grego: Well, all of it has a more or less spacey outlook. There are solo moments for drums alone, vibes, piano and synth keys, guitar with or without beat box, some oriented to a rock crudity, punk-like, some taking inspiration from my surf-music oriented youth, a little in the Rypdal mode, others "free" in the improvisatory style, having in effect a kind of tributory relationship with Cecil Taylor or Sun Ra, but all basically initially or wholly spontaneous and worked into form (in the virtual quartets) or left as a one-take expression of some improvisatory idea. But they strove, all of them, to exit the mundane space and enter into something more outward-reaching. So the space theme worked for me.

Gapplegate: Do you see yourself as an improvisor-instrumentalist? A composer? A sound artist?

Grego: The thing about doing all this music by myself in my basement, I do not see myself at all. I am just a conduit without audience (for these), without a clearly conscious aim, someone who plays a fair number of instruments but not as a "guitarist" a "keyboardist," or what-have-you. I was mostly known as a drummer/percussionist in my active gigging days, though the piano was an important part of my musical life too and the guitar and I have had an attraction to each other from my youth and that never fades. I play some bass guitar here as well but that's in the quartet numbers. It's a matter of loving the sounds, trying to make them happen, getting a facility of some sort but then trying for a musical result that interests me. I play "composer's" instruments, maybe. The thing is I don't really care how people see me as long as my music gets to them on some level. And the idea of sitting down and making some music for yourself has always been key to me. If that music can be heard by others and they get something, that's great, but originally the music on these two CDs was just for myself.

Gapplegate: Do you envision yourself playing with others again? In public?

Grego: Of course. But that wasn't my ultimate aim in the music on these albums. It was making something of the moment, of my life as it was at any point, to put it into sound. Nothing at all pretentious. I just went and DID. This stuff is very personal, sometimes very raw, but absolutely sincere, so much so that I have a certain misgiving putting it out at all, like sharing letters to a lover or something. But ultimately I hoped it might be of interest to folks, some of them, so I put it together and there we are.

Gapplegate: So this is more of your "live" self, playing to yourself?

Grego: I guess so, yes. The virtual quartet pieces are four-times live, the rest are all in real-time, like when I am playing a sustain synth set of chords with my right hand and responding on seven string as a real time sort of dialog, or when I am doing some music against a beat box, starting with guitar, switching to drums, or just simply playing an instrument by itself.

Gapplegate: Do you plan on doing more of this solo work?

Grego: No plans to, no. It's basically a one-time set of musical snapshots that captures the time spent in the first decade or so of the new millennium here outside of NYC. The times may have been rough, and sometimes there was a sheer joy in making music, but it all gets in there somehow. I hope it gives pleasure.

Gapplegate: OK, then. What's next?

Grego: There is a virtual orchestra rock post-Milesian thing, "Expansion," then an album of folk song psychedelia arrangements, all coming soon. After that we'll see.