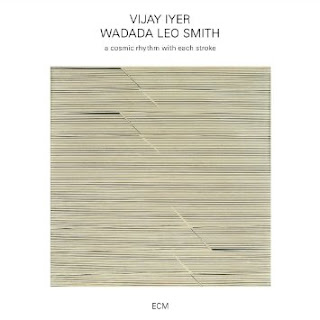 This duet recording of Vijay Iyer and Wadada Leo Smith is significant on a number of levels. Maestro Smith is one of our national treasures, a jazz composer-trumpetist whose long career is filled with greatly inspired musical creations, documented in recorded form in a discography of beautiful things and of course punctuated by his entrancing live appearances across the planet. Vijay Iyer is a pianist of ever-increasing importance. He is a mainstay among recent innovative new jazz pianists.

Vijay was a key member of Wadada's Golden Quartet for a time. There were important moments in their live appearances where the two would embark on duets that took the music to a very high plane.

They have continued to play together as a duet as circumstances allowed, most notably in an appearance together in New York's The Stone early in 2015.

All of that previous interaction serves to introduce and form the foundation of the first all-duet album of the two together, A Cosmic Rhythm with Each Stroke (ECM 2486). The program is nicely bookended by an opening Iyer piece, "Passage" and a concluding Smith opus "Marian Anderson," dedicated to the remarkable singer who gave us so much last century.

Central to the album is a joint venture, preworked by the two but ultimately improvised according to the guidelines they set out for themselves in seven segments. The title work "A Cosmic Rhythm with Each Stroke" is the result. It is dedicated to Indian artist Nasreen Mohamedi (1937-1990), whose work and outlook inspires a very focused, expansive series of analogous meditations that zero in on alternately dense and intensely quiet sets of ruminations. Wadada clearly revels in his interaction with Vijay, as does the pianist with him. This is landmark modern improvisatory art, a blockbuster of subtlety and inventive concentration.

And so it puts forth some of the best, most moving examples of Wadada and Vijay's current approach. This is one not to miss. Highly recommended.
Posted by Grego Applegate Edwards at 6:10 AM