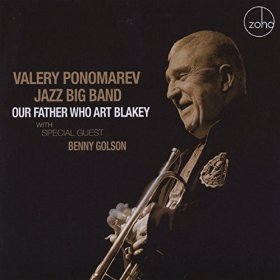 In the later phase of Art Blakey's celebrated bands came to our ears the Russian trumpeter Valery Ponomarev, who had internalized the brassy exuberance of the Brown-through-Morgan-through-Hubbard trumpet school and made something of his own from it. Now these many years later he is still at it and with his tight and swinging Jazz Big Band he plays loving tribute to the master, in Our Father Who Art Blakey (Zoho 201601). Benny Golson makes an appearance and sounds fully himself.

The band is a crack outfit who prevails live at JALC's Dizzy's Club Coca-Cola and the Zinc Bar for an invigorating set of hard bop classics nicely turned for big band. Timmon's "Moanin, " Hubbard's "Crises," Duke Jordan's "Jordu" and "No Hay Problemas," Golson's "Blues March" and Valery's own "Gina's Cooking."

The huge swing associated with Blakey's group is there, the band is very tight indeed, and Valery shows us he's lost nothing of the old fire. Valery's arrangements seem entirely right and there is no shortage of good soloists here.

So this is much more than a typical tribute album--it's the transposition of the Blakey repertoire and style into first-rate big band music. Good show!