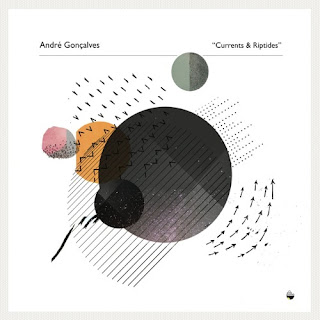 We as open listeners should be ready for anything when surveying the new music scene. The Andre Goncalves album Currents & Riptides (Shh Puma 019CD) is an excellent example. It is a studio-oriented series of two very evocative soundscapes composed and executed by Andre on synthesizer, laptop guitar and Fender Rhodes with the help of Pedro Boavida on Rhodes for the first work; Rodrigo Dias on bass and Goncalo Silva on guitar for the second.

Both pieces have a kind of uniquely expressive approach, soundscaped, sustained, developed in time, the near absence but intuitively implied presence of a drone or alternately, the presence and ambient timbral transformation of the drone (in the second piece),  and radically tonal expanses. The music concentrates on the endless variations and continually shifting intermingling of a series of motifs that grow and shrink organically and have a sort of processual feel like perhaps the patterns you perceive in natural soundscapes--raindrops, wind, the rippling gurgle of water on a small stream. They have a consistency and an infinitely variable trajectory. And like the natural world there can be the intrusion of singular events that may recur now and again against the ambiently sustained continuities and an organic processual sense of very gradual change.

It's the kind of music that lays out a tapestry of sound color that creates an open, cosmic sort of mood in the listener. And though there are others of course that have done this, the ultimate universe of tone-timbre is quite original with Goncalves.

This is music of great beauty. It is essential listening!