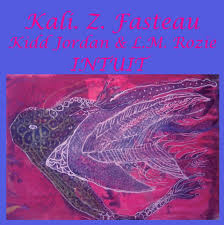 There are many facets to consider when attempting to characterize what makes multi-instrumentalist Kali. Z. Fasteau's music what it is and has been, the special qualities that go into her artistry. We can hear those facets clearly and nicely in her latest album, Intuit (Flying Note 9017), and so it lets me talk about both the new sounds and her legacy in general.

Intuit is like her many previous releases a collection of free, spontaneous compositions, free jazz if you like that term. As with the earlier efforts Kali gathers about her some important voices in the avant improvisational circles she is a part of, generally New-York-centric. Three sessions are represented here, two live, one studio.

The dynamic and effusive tenor sax master Kidd Jordan joins her for four of the 11 numbers. L. Mixashawn Rozie is her creative partner for the rest of the album, primarily on tenor but also djembe, shaker and flute. For this program Kali makes her appearance on drums, but also livens the sound tapestry with nai flute, viola, mizmar, vocals, and aquasonic.

Straight off we experience two critical aspects of her approach over the years. One is to surround herself with very capable free music artists, which is certainly the case with Jordan and Rozie. Kali at all times makes a sort of maximum interactive experience out of the artistic grouping at hand. In the process the open freedom approach allows her fellow improvising partners to open up and give excellent performances. In that you might see her as a kind of free-music present-day Art Blakey: find the best musicians and give them free reign in a group setting. That's been the case all along.

The second critical aspect of her music is the multi-instrumental approach. By having the very open flexibility of a diverse battery of instruments she is capable of sounding in her own stylistically distinct creative way, the music has always the potential of a wide set of possibilities that challenge her playing partners to give a spontaneously multi-valent, articulate response to the playing moment, which in turn spurs Kali on to respond in kind, with various unfolding sound-interactive loops that can and do cover a wide spectrum of possibilities fully, poetically.

With Intuit we get an inspired set of creative results. Kali has an excellent feel for the drum set and sets up pulsating and free structures that give Kidd and Mixashawn a good deal to respond to. Kali's nai flute, viola, vocals and mizmar extend the possibilities outward in a sort of world-village-meets-free-music realm which has always been part of Kali's way.

Jordan and Rozie turn in excellent performances as Kali does in return. It is an album that bears repeated listens and musical attention. There are many magical synchronicities to be heard and savored. It is an excellent example of Kali's music today. In short, this is a very worthwhile addition to your avant library, either as an introduction to Ms. Fasteau's art or another fine new offering.

Definitely recommended!
Posted by Grego Applegate Edwards at 5:28 AM