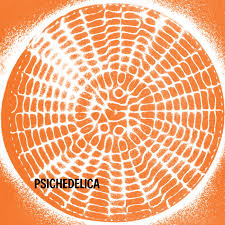 There is a good deal one might say about Italian soundtrack composer Piero Umiliani's album Psichedelica (Schema SCEB931CD). I will try and zero in on what strikes me as important or worth saying. Much of the music here was a part of the 1968 film "Svezia Inferno e Paradisia" (Sweden Heaven and Hell) directed by Luigi Scattini. A track most will recognize became the theme from the original Muppet Show, but there is a good deal more here, things that are more rock oriented, spacy, psychedelic in ways that perhaps sometimes remind of Ennio Morricone and also the zeitgeist operative at the time--the various ways pop psychedelia could be transformed into a mass audience vehicle. In that it is like what was happening when the earlier "space age bachelor music" transformed "authentic" exotica. And sometimes here and there the music reverts to a more categorical middle-of-the-road "normality" and that fits the bill as well as hopelessly campy in interesting ways.

In other words, this was to the swinging later-'60s as bachelor music was to the later '50s and early '60s. There was musical material out there to be transformed into something very au courant at the time but historically it was an art that rapidly fell into campy obscurity and obsolescence until recently. Now we appreciate much of this as fully of its period and brilliantly tacky yet ambitious in its best moments. It is at times avant edgy, then completely homogenous. For all that much of it is something of an exceptional listening experience on the whole. That is if you are up for it.

You get fuzz guitar, go-go beats, lush juxtapositions and the odd interpenetration of youth mystery with middle-class respectability. It is something my dad might of found interesting---akin to, but much better than when Lawrence Welk donned a hippie wig and Nehru jacket for a big laugh on his show back in the day. Or the show "Dragnet" when it attempted to deal with the times. It is the radical youth movement transposed for the consumption and appreciation of Joe Square. It does all of that in interesting ways. And really, that makes this album a thorough gas!

I would not have been caught dead listening to this in 1968 but today it is a hearty dollop of cultural incongruity that also shows Umiliani's skill and compositional-arranging acumen.

Bizarre and fun!
Posted by Grego Applegate Edwards at 6:07 AM