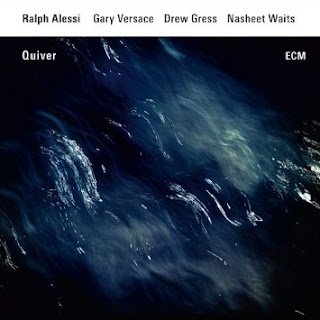 Trumpet master, composer, bandleader Ralph Alessi may have reached a wholistic pinnacle on his first ECM release Baida (see my January 10, 2014 review on these pages), but the process proceeds apace on the new one, Quiver (ECM 2438). It's his quartet as in the last album with Gary Versace replacing Jason Moran on piano but otherwise again giving us Drew Gress on doublebass and Nasheet Waits on drums. The quartet has achieved a sort of togetherness and unity that leaves room for the significant individual originally of the four artists but also sets the table for each composition (all by Alessi).

In the process the increasingly glowing trumpet work of Ralph is pronounced and exceptional. Versace acquits himself very well in both his solo and accompanying roles. Drew Gress as always is a bassist of real stature and goes very far in making the quartet shine forth. Last but not least, Nasheet Waits drums with a kind of subtle brilliance that keeps the music moving forward in truly artistic ways.

The compositions put the entire album on a special plane, much akin to the pronounced lyrical side of many ECM dates, but with an integrity and subtle sophistication that grows on you the more you listen to it.

It marks Ralph Alessi as an artist who has reached the more sublime realms of the modern improvisatory arts, making his way to the heights as a full-flowered original.

And the music has a beauty that does not sacrifice itself on the altar of accessibility. It manages to have all the earmarks of the jazz arts today, with all the complexities served up to us in very original terms, yet with an accessibility that will doubtless find a wide audience of admirers.

Highly recommended.
Posted by Grego Applegate Edwards at 6:33 AM