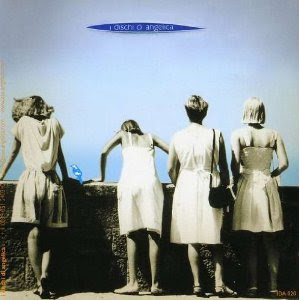 Alvin Curran is one of those composers-performers-improvisers that should be heard by anyone with designs on a complete understanding of modernity (whatever that will turn out to be when looking back 200 years from now).

He was the co-founder of Musica Elettronica Viva, one of the very first (and best) groups to combine live electronics and improvisation. They did things then that were so influential that improv groups are still trying to follow in their footsteps. He's since done a great deal of improv per se with some of the luminaries of the field.

It's his solo collage-like work that we look at today. The John Cage of "Fontana Mix" and "Variations IV" is a precursor, certainly. Sliced, diced and transformed snippets of sound, noise, musical excerpts of high. low, middle, folk, jazz, electronics, vernacular and what have you form the raw material. Where Cage had a kind of anti-structural, aleatoric stance, Curran perhaps is more sensitive to dramatic impact, the audience if you will, and there is more of a sense of structure and immersion in the distinctive sensuality of sound to what he does.

Songs and Views from the Magnetic Garden was one of his earlier masterpieces in the collage idiom. If you haven't heard it, you should. Today, though, we're concerned with his work Toto Angelica in its realization released in 2005, I believe (i dischi di angelica). The CD release has this fascinating version of the piece, plus several shorter works. It is a continuous barrage of various vocal, instrumental and extra-instrumental sounds, and if you listen a number of times it really starts to make sense. Well, more than that. Mr. Curran is one of the most creative musical minds at work today.
Posted by Grego Applegate Edwards at 4:53 AM