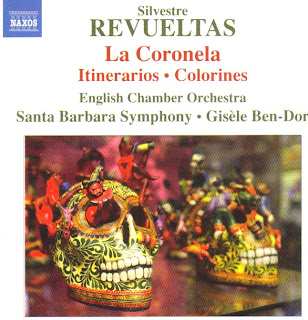 In the would-be pantheon of immortals, lined up one by one with those pretentious busts especially popular more than a few centuries ago, Silvestre Revueltas (1899-1940), the composer from Mexico, probably would not be an obvious choice for inclusion. His reputation was not especially strong in the LP years. The CD era, however, has seen a number of good releases of his music. Today we look at a new one.

Naxos has just released a three work collection of Revueltas's orchestral music, with conductor Gisele Ben-Dor ably leading the English Chamber Orchestra and the Santa Barbara Symphony. What's remarkable is that the main work, a ballet, "La Coronela (The Lady Colonel)" (1940), has never been recorded before. Why? I don't know. The score somehow disappeared. What matters is the music, which is filled with the vivid orchestral colors, heightened rhythms and Mexican folk strains with which Revueltas's music excels. It may not have the somewhat more strident modernisms of some of his more well-known works, but it is nevertheless a delight.

The other two works on this disc, "Itinerarios" and "Colorines" have a bit more of that.

Revueltas should not be taken for granted. His music still speaks to us if we listen. This collection, made doubly important by the addition of a significant unrecorded work, makes for essential listening.
Posted by Grego Applegate Edwards at 4:56 AM