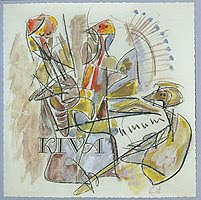 The group Kiva goes way back to 1975, when American trombonist/violinist John Silber and Franco-percussionist Jean-Charles Francois co-founded the ensemble at the Center for Music Experiment, University of California San Diego. Judging by the recording at hand, they created some very formidable group improvisations during the 16 years of their existence.

The self-titled two-CD set released on Pogus Productions documents four moments in their history: three lengthy musical discourses from 1985 and 1991, and a tape collage of various group performances assembled and re-realized by John Silber.

Essentially the group as represented here consists of the founding members plus Keith Humble on piano and synthesizer, and Mary Oliver on violin and viola for one of the performances. The collage segment seems to include additional members, which were often culled from students at the university.

That deals with the basic logistics. The music is what matters, of course. And the music is quite challenging. It is a series of excellently executed abstract improvisations that owe something to MEV, AMM, Il Gruppo and the improvisational ensembles led by Stockhausen, more so than the music created by, say, Albert Ayler or Evan Parker. This is more on the new music end of the spectrum. It isn't so much jazz-related.

They are in excellent form, whatever the stylistic parameters. The double CD set gives you a very generous amount of music and I must say it is all of a very high provenance. There is a sensuous revelling in the sound universes created. Nothing seems academic in the pejorative sense (a sense I do find a little disturbing, but yet I evoke anyway).

Kiva is an ensemble that could have easily been missed, I for one am very happy to have gotten the chance to hear them on this release. Highly recommended.
Posted by Grego Applegate Edwards at 5:15 AM