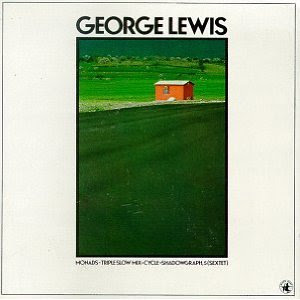 George Lewis recorded one of his first albums, Shadowgraph, in 1977. It was released on Black Saint in 1978. Now I suspect that everything that could be said has been said about this album. Nonetheless my blogs are in part an odyssey of my listening experiences in time, and if I do not address some of that there will be an imbalance, a lack of representative things I do listen to that perhaps nobody seems to send to me in the form of promo copies. So. . .

I am not sure why or how I missed this release when it first came out, except to say that 1978 began a long and somewhat distracting (to the music) journey I took in educational enlightenment and, later, protracted wage slavedom, which wasn't so bad because I managed to eat every day and pay the rent.

So there we are. Shadowgraph has an impressive lineup of musicians: Lewis, Douglas Ewart, Leroy Jenkins, Abdul Wadud, Anthony Davis, Muhal Richard Abrams, Roscoe Mitchell...many of them prime AACM cats, all of them important Afro-American improvisers and most of them also important composers of the music.

The four pieces put down onto tape and assembled for the album are in the free-form chamber improvisation-jazz mode. Lewis introduces electronics in addition to his trombone and tuba, and everyone contributes. It is wonderfully subtle music. It sounds to me like one of the gems of that year, certainly. The sound color sculpting on this one is just superb, as is the very intelligent utilization of space by everyone involved.

Now if someone tells you that the '70s were a bust for "Jazz," play them this one and then send them packing. The fact is that the '70s were incredibly important years for the music. And George Lewis was right there in a central position. He's a fabulous trombonist, sure, but a composer-conceptualist of the very highest sort as well.

Perhaps my quick take on Shadowgraph will not satisfy those looking for detailed musical description. Well that's been done. This posting serves mostly as a reminder that one should not miss this recording if one has serious designs on understanding improvisation and its development in our era.
Posted by Grego Applegate Edwards at 5:15 AM