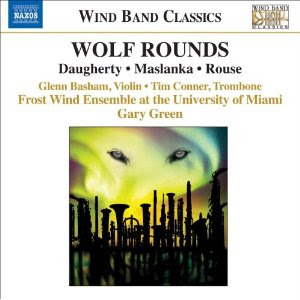 From Naxos' Wind Band Classics Series comes a disk of three contemporary compositions, all written between 2006-2007. For some reason it took me a few more listenings than usual to find my way into the music. It's not that it isn't accessible, far from it. It demands some attention, which all good music does, and it may be that the first few times through I was distracted.

Be that as it may, the Frost Wind Ensemble of the University of Miami under Gary Green give it their best shot, and that's quite good. These pieces are not squarely in the avant realm, though the final work is a bit more edgy than the other two. The pieces are basically tonal and well-wrought. It's far from the marching-band-sitting-down-in-a-more-serious-way that some of the classic Hanson Mercury wind disks sounded like. It's more like orchestral music without the string section. And that certainly works with these pieces.

We've discussed Michael Daugherty's music earlier in this blog (see postings for October 23 & 26, 2009). His "Ladder to the Moon" on this release has charm. It's a lyrical, sometimes mysterious sort of tone poem in a neo-romantic vein. There's a concerted violin part, well played by Glenn Basham.

David Maslanka's "Concerto for Trombone and Wind Ensemble" features some expressive trombone realized by Tim Connor. The ghost of Wagner lurks somewhere behind the scenes, though he never quite gets on stage. There are moments, too, that seem like the music is about to break into the "Dies Irae" part of Berlioz's "Symphony Fantastique," but it never happens. The music is very good; not especially original, though.

Finally there is Christopher Rouse's "Wolf Rounds." This has some real spunk to it. There's a driving, almost rockish-jazzish quality to the opening lines, some menacing predatory sounds from the lower horns and timpani. An elaborate contrapuntal passage follows in what is the most modernist sounding of the three pieces. Towards the end there is an even more insistent contrapuntal tutti that includes some Latinesque rhythms from the percussion section. The finale gives you a great send off: exciting music that shows Christopher Rouse a composer that continues to deserve our full attention.

All in all Wolf Rounds (the CD) gives you three different takes on what the wind band can be today. At the Naxos low price, it is quite worth investigating.
Posted by Grego Applegate Edwards at 4:26 AM