Jon Hassell, Reporting from the Moon 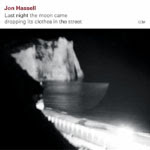 Last Night the Moon Came Dropping Its Clothes On the Street (ECM). OK that's the title of Jon Hassell's fairly recent CD. I'll be honest. I really haven't caught his other albums so I have nothing to compare this to. I know he calls his music "Fourth World." That's cool but at least on this recording he sounds like a cosmic space cadet of the soundscape variety mixed with some very mellow, spacey Milesian almost-Funk.

I glanced at a review somebody else did, which I don't usually do, but I was looking for the cover image to drop in on this posting, and that person knew every album and what Hassell has been all about. I don't. In that sense I am playing Frozen Caveman Lawyer here.

It sounds like an ECM album, which will hardly surprise, since that's what it is. But there are more orchestral electronics in parts, so it is in no way generic ECM. Hassell's trumpet is plaintive and like a pilgrim searching, 'tho I do not know for what. Does any one of us know? He often uses a device that doubles his sound and he does it with subtlety, 'tho again if he didn't I am not the sort that would object. And there are all sorts of things going on behind him.

This is brown study stuff, music to send you off drifting and dreaming about things that I would hope are pleasant or profound, or both. Now I want to hear his earlier work. You who already know all about his music wont need me to say any more. I must say I liked this one. Perhaps I'll check in with a later posting after I've heard some of his other recordings.
Posted by Grego Applegate Edwards at 4:58 AM