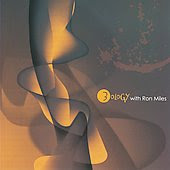 The group 3ology has ten years of playing together under their belt, and it most certainly shows to good advantage on their new, third CD 3ology with Ron Miles (Tapestry). The Colorado-based trio of Doug Carmichael, saxophones, Tim Carmichael, acoustic or electric bass and Jon Powers, drums, team up with cornetist Ron Miles on this one, and the combination leads to some adventurous results.

The music is loose and sometimes blazing jazz-rock/funk. This is too intelligently interactive to be pigeonholed into a kind of mainstream funk category. Tim Carmichael is a very out-front bassist that carries a groove more in common with Dave Holland than, say, Michael Henderson, and his chemistry with drummer Powers motors the session throughout to good places without having to stop for gas (to stretch the metaphor a bit).

Both Miles and Doug Carmichael play thoughtfully and well, both together and with the potent rhythm section. And they have something to say of their own, which is perhaps one of the points of such music!

I found myself more and more satisfied with what these cats are doing as I listened repeatedly. It's not just any old funk groove. It's Braniac music.
Posted by Grego Applegate Edwards at 4:42 AM