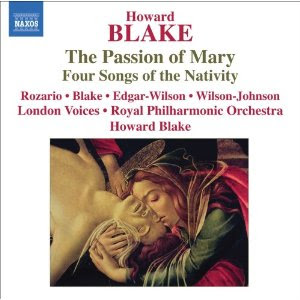 I first came upon the music of Howard Blake via the soundtrack to the memorable animated film The Snowman. In particular the main theme as sung by boy treble with orchestra really captivated. It was a little like a cross between The Moody Blues's Days of Future Passed and middle-period Keith Jarrett. Hearing it still gives me goose bumps.

So when I saw this new Naxos release of Blake in a more "serious" concert choral zone, I jumped on the chance to hear and review it.

Blake seems like a natural when it comes to vocal-orchestral expression. Everything he writes in these two works (The Passions of Mary; Four Songs of the Nativity) seems to lay out in a kind of idiomatic near-perfection.

Howard Blake himself conducts the soloists, the London Voices, and the Royal Philharmonic Orchestra for this recording, which seems definitive.

The music falls in a 20th Century tradition of such works by Walton, Vaughn Williams and others similar. That is to say, it uses extended tonal-traditional means to express lyrically the dramatic import of the narrative texts. The Passion of Mary follows a modern oratorio vein; For Songs of the Nativity uses the song form for some memorable Christmas fare.

Mr. Blake is a composer of talent. These are some beautiful and moving settings. If you are an Anglophile in matters classical, you will no doubt want this one. I will file it happily on my "modern English composers" shelf. That is, when I am not listening to and enjoying it.
Posted by Grego Applegate Edwards at 4:59 AM