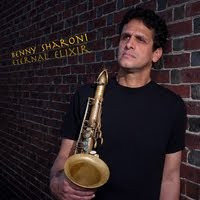 To start a review off by noting that tenor-sax man Benny Sharoni was born on a kibbutz in Israel and grew up there, that his father was originally from Yemen, that he has studied with Jerry Bregonzi and George Garzone would imply that all of that is relevant to what he plays on his debut CD Eternal Elixir (Papaya Records). Well I don't know that it isn't. He does seem to be quite fluent in the modern jazz treatment of the minor mode and there's a ballsy not-quite-mainstream approach (if you associate the mainstream with music that can be anemic, which it can these days) that Bergonzi and Garzone have in common.

That all assumes that musicians are nothing but an algebraic proportion of the cultural milieu of their upbringing and education. We know that cannot fully account for what makes somebody thrive, nor does it account for the particular combination of elements in any artist's way of creating. Like for example I happen to have cultivated a life-long love for Dostoevsky and Melville, but I don't think it explains how I write, exactly.

So let's cut to the quick. I like this album and I like Sharoni's playing. It's modern, nuanced, and has the ability to fire up or remain tranquil according to the song and the mood. If I hear a trace of Joe Henderson plus Bergonzi, Garzone and Lovano in his playing, all the better, since I do like those players very much. His fellow session mates are well-chosen. Mike Mele shines on his guitar solo spots, Barry Ries plays a puckery trumpet with roots in the '60s masters of the instrument, the alternating piano work of Joe Barbato and Kyle Aho can be filled with the old-school hard bopper's way or a post-Tyner bag, depending, but they are good exponents, and the rhythm team of Todd Baker (bass) and Steve Langone (drums) are solid.

This is hard-bop-and-beyond blowing. It's no accident that Sharoni spices up his interesting originals with some classic Blue Mitchell and Donald Byrd. Hebb's "Sunny" is not one that I would expect, but Sharoni does something on his solo, so. . . then "To Life" evokes another musical trunk that it would be natural for someone like Sharoni to reference, as we imply (but does not explain HOW he references it).

My only quibble is about the tradition and what we choose to maintain of it. Byrd's "Pentecostal Feeling" was one of those Blue Note boogaloos that found its way onto jukeboxes in the mid-sixties. In that period just about every Blue Note record had at least one of those numbers, because there was a community of listeners that dug it.

It's an old style and I am not sure it speaks to us today as much as some other aspects of the tradition. I'll be honest. I'd really rather listen to James Brown do something in this mode, because he and his band could smoke it to the high heavens. The jazz boogaloo thing always seemed to be (and still does) a kind of watering down of the electrifying experience of hearing Mr. Brown do it. What if every rock act were to be obliged to do a twist song? Not all of the past needs to be rehashed, and we can always go back to the originals. That's not to take away from the whole thing, but it's a personal bugaboo with me. And it is only a small part of what's on this album.

Benny Sharoni shows he can play, really play on Eternal Elixir. It's a fine outing and gives notice that here is a player! Bravo for that.
Posted by Grego Applegate Edwards at 4:30 AM