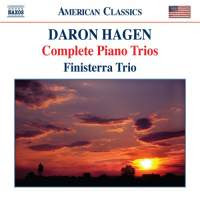 American composer Daron Hagen (b. 1961) may not be universally recognized for his chamber music. The recent release of his Complete Piano Trios (Naxos 8.559657) may do much to rectify that.

There are four trios written between 1984-2007. Each has its own character. I must say I do quite like the third, based on the folk melody "The Wayfaring Stranger."

His music is lyrical, "neo" more than avant garde, idiomatic and well thought out.

It's the sort of music one knows will take quite a few listens to absorb fully and before such work-pleasure is complete, some ultimate or semi-ultimate judgement will not be on the personal program. At least that's how it is with me.

This is music that is "serious" in the same way that Aaron Copland's chamber music was. It is not given to pleasantries. There is a depth to these pieces I've yet to fully plummet. I will say that the performances by the Finisterra Trio seem marvelous to me. Detailed and passionate interpretations prevail.

I do recommend this recording. I reserve final judgement on the music itself however, until I've lived with it for a longer time. One thing is clear. Daron Hagen's Piano Trios are formidable works.
Posted by Grego Applegate Edwards at 4:38 AM