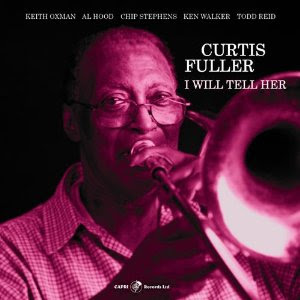 Curtis Fuller was (and is) one of the handful of master hard bop trombonists. After J. J. Johnson, it could be said with much justification that he did most to advance the style in the late '50s through the sixties. Certainly his contributions to a particularly wonderful Art Blakey's Jazz Messengers lineup were seminal, as were his own solo outings, not to mention "Blue Trane."

He is active today. Very active. You can hear how active in his new 2-CD set I Will Tell Her (Capri 74100-2). This has one studio and one live disk, both with a solid sextet that includes some nice playing by Keith Oxman, tenor, and Al Hood, trumpet. Don Sickler contributes the charts, at least on the studio date, and he is at his usual level of craftsman-like inspiration. The music is a good mix of originals and jazz standards.

Now I'm not going to tell you that this CD package contains music that will change the face of music in the next 20 years. No. What it does is show you that Curtis Fuller, though he may not be giving out with as many 32nd note runs these days, remains a vital player. One note from Curtis and you know. He gets something on all of them. A master phraser of finesse. Listen to his ballad rendition of the title cut. The album is dedicated to his wife of long standing, and how he feels comes out there, whammo. But then he can swing the house down too.