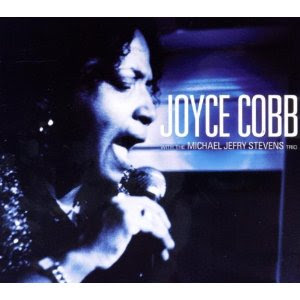 While we babble about new jazz vocalists and how some of them are best left in some sort of mellow but isolated world where we don't have to hear them (no offense to the good ones) along comes somebody that, from the very first notes she sings, makes you forget about all that. I refer to Ms. Joyce Cobb and her self-titled album (Archer 31934). Now I have to say she totally convinces me.

Start with the accompaniment. It is pretty ideal. Michael Jefry Stevens, his piano and his trio. Mr. Stevens has rapidly become one of those players that defines how one can proceed out of an Evans-Jarrett sophistication of harmony and line and make of it something that is Michael Jefry Stevens music. He swings; he thinks; he executes; he plows new fields without a tractor. He is a joy on this one (and his own albums are well worth hearing too).

Then Joyce Cobb. She exudes jazz. She phrases in a totally Cobbian way. She changes her vocal tone almost bar by bar. She has a terrific sense of time. She recomposes standards in ways that convince. There's none of that "tricky, show-off hijinks, Charlie the Tuna style." She ad libs as she feels it. And she feels it. This is what singing is about.

There's a very nice choice of repertoire: "Moody's Mood," a couple of Monk tunes, "My Heart Belongs to Daddy" (and Daddy sure doesn't sound like old pops), "In Walked Bud". . . .

She gives each one her own spin. And Michael Jefry Stevens on piano, Jonathan Wires on contrabass, and drummer Renardo Ward sound terrific. They are true col-laborators on this one.

Now I suppose I could make comparisons (Betty Carter, Abbey Lincoln, Carmen McRae) and she would hold up under such scrutiny. Because in her own way she has that powerful, deceptively off-hand way about her.

You like the vocal part of the music? I would recommend you HEAR this one.
Posted by Grego Applegate Edwards at 4:48 AM