Erosonic is David Mott and Joseph Petric; "Mystery Theatre" is an Aural Example of Why That Matters 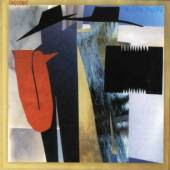 We backtrack again today, so-called Black Friday (don't get me started on that boondoggle), to an earlier album by the duo Erosonic (David Mott, baritone, and Joseph Petric, accordion), Mystery Theatre (Victo 085).

This is what used to be known as "Third Stream" music, a combination of modern classical and jazz elements. The former comes out with the set of weighty and lucid compositions on the disk, most by David Mott, two by both musicians, and one by David Keane. These are harmonic-rhythmic workouts and the jazz element comes out in the drive and sound of the music, especially in David's baritone sound with its timbral and improvisational originality (see the other reviews of David's music on these pages), and in the places allocated for improvisation.

I'll admit I am not always an accordion fan, but what Joseph Petric does on Mystery Theatre makes me forget all of that. He is a real virtuoso and interacts with David on a high level.

This is music that has compositional thrust and brilliant performances.
Posted by Grego Applegate Edwards at 5:00 AM