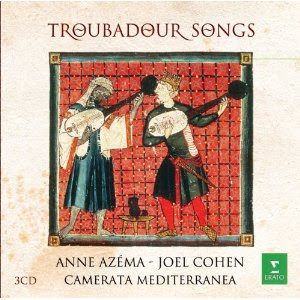 A revolution in early music practice took place beginning some time in the later '60s. A renewed attention to the character of the instruments used and in what numbers and combinations in any era became increasingly of concern. Similarly greater attention began to be paid to reconstructing more accurate and/or more adventurous realizations of what posterity left for us to bring back to life.

The three-CD set of Troubadour Songs (Warner Classics and Jazz/Erato 256467986-4) from the middle ages as performed by Camerata Mediterranea is a product of that performance revolution. The psaltery, recorder, medieval fiddle and harp are used to create an atmosphere far removed from the Romantic Era's sound and outlook.

The body of Troubadour Songs that survive are a treasure trove and a high point of the repertoire available to us today. These were the sophisticated pop songs of the day and give us a valuable glimpse into the outside-the-church aspect of medieval music making. As with anything from those ages, the secularity of secularism was thoroughly shot through with a religious cosmology that pervaded all. It is in part this kind of dualistic outlook that provides much of the wonder and feeling of "otherness" you may get when experiencing a great performance of those surviving masterpieces of the age. When done properly the Troubadour Songs have a charm that transcends time and space.

The three disks recorded by Camerata Mediterranea in the '90s on Erato and now available to us again in this box set certainly bring out the melodic lyricism of the vocal parts vividly and, as I've implied, bring that together with a very sonorous and otherworldly instrumental realization of the accompaniment. To fall under the spell of this music and the excellent performances here is to enter a world you find is not one as familiar as you may have thought.

This is music to while away an afternoon, lost in the magic of a past that we are no longer so sure we understand completely, but we resonate with its mysterious beauty. It's a very captivating set of performances. Heartily recommended.
Posted by Grego Applegate Edwards at 4:54 AM