Zwilich, Three Decades of Music for Piano and Orchestra 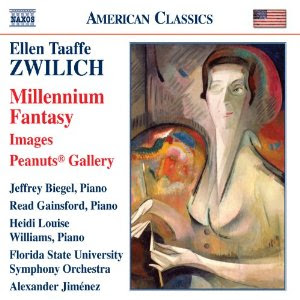 I was exiting a concert by a prominent orchestra a few years ago when I overheard an elderly woman remark to her companion, "Shostakovich is all well and good, but he's no Beethoven." I was momentarily taken aback. These things are going on in that listener's mind despite the years that separate the two composers, and now despite the years that separate us from either of their worlds. How can you come to appreciate any modern composer if you have to filter their music through one of the masters of a much different era and style? One answer might be found in the music of Zwilich.

Right, Ellen Taaffe Zwilich. She belongs to that rather rare category of modern composers who have gained acceptance and even popularity for a pretty large group of otherwise possibly indisposed concert music listeners. And yet there is nothing condescendingly ingratiating to be found in her music. What there is about her music, though, can be seen pretty clearly in her Millennium Fantasy (Naxos 8.559656), which features three substantial works for piano and orchestra, one each from the last three preceding decades.

The music, as in the cases of Aaron Copland and Leonard Bernstein (and of course George Gershwin), has a genuinely "American" feel to it. And it's a shade on the populist side of things. The "Millennium Fantasy," for example, is based on a folk song Ellen's grandmother sang to her, "Wayfaring Stranger" if I am not mistaken. Zwilich interweaves the folk theme in the dialog between piano and orchestra like a recurring memory intrudes at various points when, say, one is drifting off to sleep. It testifies to her fertile inventiveness and total mastery of the compositional mode that the folk melody fits right in with other more modern sounding motifs.

Another example is the "Peanuts Gallery for Piano and Orchestra" from 1996. Each movement portrays a particular character from the popular comic series, in a lighthearted but musically enriched way.

Even her most "serious" work on the program, "Images for Two Pianos and Orchestra" (1986), devotes each movement to a particular painting, in each case by a woman artist. So there is a literal program to reassure a sometimes wary audience that all these modern sounds "mean" something.

Regardless of all that, it is Zwilich's music that wins the day. There is a fluency and ease of expression to her music that encourages acceptance of the modern idiom in which she works. So as I listen to this very enjoyable Naxos release, I am thinking that this music should find an even larger audience. The Naxos budget price, the fine performances by the Florida State University Orchestra and the three piano soloists, the substantial yet accessible Zwilich scores, all this should be well-received out there in musicland. And for me, someone who can ride with pleasure to the nether worlds of the most modern utterances that could be conceived, I do not find her populistic tendencies in the least off-putting. That is in part because she is such a gifted composer. The music wins out, no matter where you stand on modernism. It's too good to be subjected to factionalism. And this recording is a delight to hear. Repeatedly without a doubt.
Posted by Grego Applegate Edwards at 4:42 AM