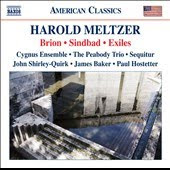 Harold Meltzer, born in Brooklyn New York in 1966, has a lyrical logic to his music. He notes that he has been influenced by Stravinsky's Agon, and when you listen to his music you understand how. There are melodic cells that occur and recur in his pieces and they can be contrasting or similar, depending. And like middle-late Stravinsky those cells can vary stylistically. Meltzer's cells are lyrically memorable and the music flows with an ordered logic that pleases the aural mind's eye.

This is what I have gleaned from listening to a new Naxos (8.559660) release of four chamber works he composed in the past decade: "Brion," "Two Songs from Silas Marner," "Sindbad," and "Exiles."

"Brion" is a chamber gem, with vivid writing for guitar, mandolin, winds and strings. It's 18 minutes of musical bliss, well worth the price of admission. In fact it is all worthwhile.

"Sindbad," for violin, cello, piano, and John Shirley-Quirk as narrator, is an exception however, for reasons that have nothing to do with the music per se. It runs almost 30 minutes and the actual instrumental music parts are quite interesting. Now I suppose I should say straight off that recitation rather leaves me cold. If it's part of an opera and moves the plot along I can understand; otherwise I find very few things that can be said are worth saying rather than singing. Shakespeare, fine. The Gettysburg Address, again fine. "Sindbad" is a rather amusing story, but it does not hold its own as worth declaiming in its own right. Now that's not to take away from the text itself, or the music that goes along with it. I'll admit it is a personal prejudice I have. I didn't like it.

But the songs and the chamber pieces are very engaging, well crafted, inspired. And the performances sound quite good. Hearing this CD, I want to hear more from Harold Meltzer. He has something going.
Posted by Grego Applegate Edwards at 4:46 AM