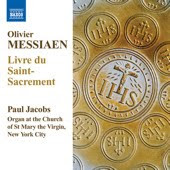 Olivier Messiaen composed Livre du Saint-Sacrement in 1984 on a commission for the American Guild of Organists. It is his last work for solo organ, and it is the longest, running nearly two hours. Since Messiaen's collected work in this medium is without a doubt at the pinnacle of 20th century classical milestones, it seems imperative that one experiences such a substantial final contribution to his oeuvre. I regret to say that I had not done so until now. With the recent Naxos (8.572436-37) 2-CD release of Paul Jacobs performing the work, I finally have gotten the change to linger in its spacious aural caverns. I am back on these pages to report in on what I have heard.

This is music both massive and delicate, alternatingly. Livre du Saint-Sacrement is both mystical and triumphant. Widor and especially Tournemire lurk somewhere on the side aisles. Messiaen had fully absorbed the coloristic pathways the two composers had staked out for the solo organ, and it seems that Messiaen's position as the logical successor and innovator in their school is quite clearly shown in this last, great work. The musical language is Messiaen's at its most original, but the great swells and contrasting meditative quietude found in the 18 movements come out of his great familiarity with his recent forebears.

That is to take nothing away from Messiaen's boldly moving poeticism, only to recognize that he fits into a continuum. This is music of incredible power, played masterfully by Maestro Jacobs on the Organ of the Church of St. Mary the Virgin in New York City. The sound is ravishing. This is not something you'll be whistling on the way home from work. It's abstract, mystical and expressive of Messiaen's strong Catholic faith. It's also some mind-blowing sound!
Posted by Grego Applegate Edwards at 4:09 AM