Territory Band and "New Horse for the White House" 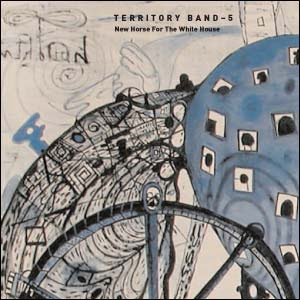 Territory Band is/was an 11-piece avant jazz collective with an all-star line up of musicians from Chicago and Europe. New Horse for the White House (Okka 2006) is a generous 3-CD set of the band at a peak period, and it's at a great price. Two of the disks were recorded in the studio, one was recorded live, all in 2005.

Ken Vandermark wrote the compositions and in many ways serves as the guiding light. The pieces combine idiomatic written sections and collective improvisations spiked by an out-front soloist or two when it seems right.

It's a marvelously varied sound they get. There is tightness, looseness and a sense of structure and direction that comes out of a clear vision and talented players logging in a good deal of playing time/rehearsal. At least that's how it sounds.

There is so much good music here that demands your attention. It may make a handsome adornment to your shelves but it was meant to be heard. It is worth the effort. This is another important disk from one of the seminal cats to come out of Chicagoland.
Posted by Grego Applegate Edwards at 4:19 AM