A New One From Rob Mazurek's Exploding Star Orchestra 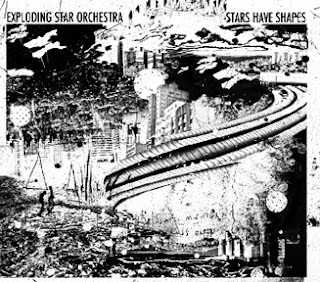 I have little doubt that Chicago is resurging as an important center for the new improvised music (known as jazz or simply improvisation). It never disappeared from the world scene, of course, but there is so much great new jazz coming out of there lately that there is a special feeling I get after listening to what's been forthcoming and when I weigh it mentally-musically as a whole.

One of those wonderful things that has emerged is cornetist-composer-bandleader Rob Mazurek and his avant big band, Exploding Star Orchestra. Their new CD/LP Stars Have Shapes (Delmark 595) illustrates all that's good in Chicagoland. It's a Chicago all-star lineup--14 stellar improvisers in Rob, Nicole Mitchell, Jeb Bishop, Jason Stein, Greg Ward, Jason Adasiewicz, Mike Reed, and so on.

The compositions have flow and density. And Maestro Mazurek makes use of electronics at certain points to alter the sounds and add to the color of the performance. The band improvises collectively in a beautiful way, the compositions give contrast between drone, avant smear, sound poetry and full-blast-off power in ways that further distinguish this effort.

Stars Have Shapes is a fruitful meeting of Chicago titans, and Mazurek's compositional and conceptual direction puts them in a very attractive and important place in the new jazz today. Yes, it's that good, I think.
Posted by Grego Applegate Edwards at 4:44 AM