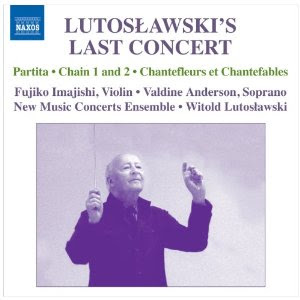 The so-called Darmstadt School (Webern, Boulez, Stockhausen) dominated European avant garde classical composition from sometime in the mid- to late-fifties through to the early seventies. But of course not all composers followed in the wake.

Witold Lutoslawski (1913-1994) was one who didn't. Hindsight has allowed new music lovers to re-appreciate the originality of his musical vision. The Naxos release (8.572450) of the last concert that Lutoslawski conducted gives us a fine opportunity to experience some of his best later compositions at a great price.

The logistical details are that Lutoslawski conducted the New Music Concerts Ensemble in a program of his works in a concert in Toronto on October 1993. It was most fortunate that tapes were rolling that day because the performances are excellent; and the compositions are late Lutoslawski at his best.

Basically there are three major works for violin and orchestra represented on the program: "Partita," Chain 1" and "Chain 2", plus the song cycle "Chantefleurs et Chantefables" for soprano and orchestra. Fujiko Imajishi shines forth as the violin soloist for the former works; Valdine Anderson sings with great attention to detail and sensuous beauty on the song cycle.

In the end the compositions show that Lutoslawski handles the orchestral sections in ways that show a continuity with the past: winds, strings, percussion, etc., have a sectional resonance for the most part. Don't expect him to divide up the orchestra in unprecedented ways, with 52 different parts for the strings, for example. Similarly this is less a music of a pointillistic nature, nor is it much given to contrapuntal passagework. If Boulez's orchestral music may be likened to the painting stipples of Cignac, or the drips of Pollock, Lutoslawski might be likened to the blocks of stain associated with the Color Field painters (Frankenthaler, etc.) The point may be slightly strained but the idea is that there are less "blips and bloops" with Lutoslawski, and more block-like sound events. (Though "Chain 1" is a bit of an exception.)

What you CAN expect is that Lutoslawski has an extremely keen ear to develop orchestral atmospheres and textures that have brilliance, movement and a certain luminescence. He's a master of the forces at hand. He chooses to exercise that mastery in his own way. The important part, the musical result, is consistently singular and stimulating to the aural senses and the musical imagination of the listener.

This is an essential disk for lovers of the Eastern European contemporary concert scene. And it makes a great introduction to a composer with whom you may not be familiar. This one is a winner.
Posted by Grego Applegate Edwards at 3:40 AM