The Art Ensemble of Chicago. Live at Irridium, 2004 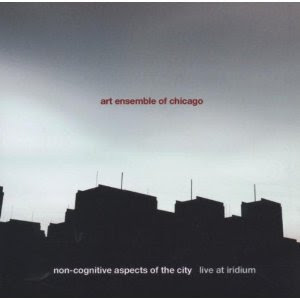 The Art Ensemble of Chicago have transformed the jazz world from their beginnings in the later sixties through to today. There is the thorough integration of percussion doubling and the little instruments; there is the humor; there are the intelligent free improvisations; there is the injection of stylistic elements that cover everything from rock to reggae and classical music; there is the traditional African influence; the compositional originality; there are five very distinctive musical personalities; there are the costumes; there is the dynamic flow of each and every set. I could go on. With the sad, successive losses of trumpeter Lester Bowie and bassist Malachi Favors, and the departure of reedman Joseph Jarman, there were natural concerns about whether the group would continue.

The answer on the most impressive 2-CD set Non-Cognitive Aspects of the City: Live at Irridium (Pi 20) is a resounding "yes!"

This is a terrific piece of phonography. The Ensemble welcomes the return of Joseph Jarman and fills out the ranks with Corey Wilkes on trumpet and Jaribu Shahid on bass. When you add to this Roscoe Mitchell's and Don Moye's continued essential presence in the band, the expectations were high (for me).

Non-Cognitive Aspects of the City confirms those expectations in every way. Sure, there are no true replacements for Lester and Malachi, but Corey and Jaribu do their own take on their roles, putting themselves into the mix.

The two-CD gives you a judicious selection of some of their seminal compositions redone, like "Erika," "Song for Charles," and "Odwalla." There are newer pieces too and some very wonderful collective and solo improvisations.

This is the AEC on a very good night. A new band within the old band. It is sublime. It is a cornerstone of their work in the last 10 years. May they continue to thrive and prosper.
Posted by Grego Applegate Edwards at 4:40 AM