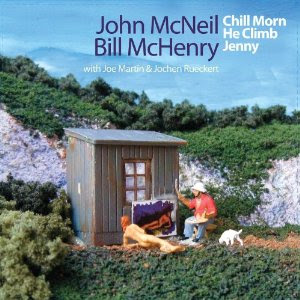 Live jazz is what jazz IS. Say what you want, a small club is still probably the best place to hear jazz at its most direct, spontaneous, and uninhibited. I don't suppose that will come as a revelation to many of my readers. Still, it is true, even if the economics of that equation are increasingly difficult to sustain, at least for the musicians. Compare what was happening in Manhattan in the '40s, especially on 52nd Street, with what is going on now. Back then, you had, just on one block alone, maybe ten clubs offering a six- or seven-night gig for as many bands. Today there are only a handful of clubs doing that regularly. Otherwise it might be one night a month for you, and maybe only for a take of "the door" or worse.

The musicans keep on as best they can. The Cornelia Street Cafe in Manhattan hosted the John McNeil and Bill McHenry group for a number of nights (I assume) in November of last year. Luckily, the "tapes" were rolling. You can hear what they were doing on their new record Chill Morn She Climb Jenny (Sunnyside 1268).

Well, you might mumble to yourself, "so what?" The so-what is that this is a terrific example of the combined looseness and inspiration that a live jazz recording should have. It's a pianoless quartet in the classic mode with John McNeil and Bill McHenry as the front-line soloists, on trumpet and tenor, respectively. They both are totally on it for this date and the rhythm team swings the whole gig with the open-ended feel a classic open-middle quartet has done so well in the right hands.

They tackle some of the more obscure numbers from the jazz songbook--like a couple of Russ Freeman tunes and Wilbur Harden's "Wells Fargo," which was first performed by Wilbur with Coltrane on an old Savoy release.

The point though is that this takes the late coolbop style and loosens it up, contemporizes it, and lets it breathe. It's a glorious looking-back-by-looking-ahead action and it just sounds great no matter what you want to call it. These guys need to be heard. . . today. Chill Morning He Climb Jenny gives you that--with irresistible charm and conviction.
Posted by Grego Applegate Edwards at 5:04 AM